The Van Gogh Museum Book Club is a Facebookgroup where people from all over the world gather to deepen and expand their love for Van Gogh.

Every two weeks, we'll read a book form the Van Gogh in focus series, followed by a Live Book Club Discussion. Museum staff will join the conversation to give background information and answer your questions.

Anyone is welcome to join the free Van Gogh Museum Book Club. The books are available in epub format (suitable for e-readers) and pdf, both in English and Dutch.

The Van Gogh in focus series consists of seven small, compact books that focuses on unusual viewpoints in Van Gogh’s art. The books present many new facts and insights on topics such as Vincent's remarkable paintings of sunflowers, his passionate correspondence with his brother, or Vincent's love for Japanese art. All books are illustrated with documents, as well as paintings and drawings by Van Gogh.

The entire series will be made available online in the coming weeks:

Van Gogh started collecting Japanese prints while he was living in Paris, and became convinced of the need to look at things and to work ‘as the Japanese do’. When he moved to Arles in 1888, this developed into almost a religion. He now regarded the success, the future of modern art as being almost wholly dependent on emulating this exotic example.

Passionate as it was, however, Van Gogh’s love affair with Japan receded into the background after a year. He continued to venerate Japanese artists, but he now saw his own efforts to work in their soirit as overambitious. ‘Well then, I shall never mean anything significant as a painter, I fully realize that,’ he wrote despondently. Van Gogh and Japan shows just how wrong he was.

In his thirty-seven years Vincent van Gogh conceived many intense and passionate loves. Van Gogh’s story is punctuated by an extraordinary succession of unrequited, rejected and doomed loves, which he chronicled from the depths of his emotions. Some of the women in his life feature in his drawings and his paintings.

The only great love that would endure throughout his life was the love between him and his brother Theo.

The appearance of Vincent van Gogh’s art was transformed by his encounters with French Impressionist painting. It was the work of the Impressionists, who sought to capture the transient effects of colour and light, that encouraged him during his stay in Paris to abandon the somber palette of his earlier canvases and to adopt the rich, vibrant colour range of his most celebrated works.

This book follows Van Gogh’s discovery of and interaction with the art of Impressionists. Without Impressionism Vincent would not have become the painter we know today.

2. Van Gogh and his letters

Vincent van Gogh was a groundbreaking painter and a prodigious writer of letters. His surviving correspondence reflects his passionate life. The letters tell the story of Van Gogh’s quest for his destiny, a search that led him to become an artist; of the great bond with his brother Theo, the only one who always believed in him; of his sometimes painful friendships and his yearning for recognition; and of his love for art and literature.

Behind this fascinating story there is another: that of the letters themselves. More than one hundred and thirty years old and often containing wonderful sketches, the original documents – most of them now in the Van Gogh Museum in Amsterdam ¬– unite the artist and the letter-writer.

More from this series

All books from this series will be published online in the coming weeks. Keep an eye out on this page. 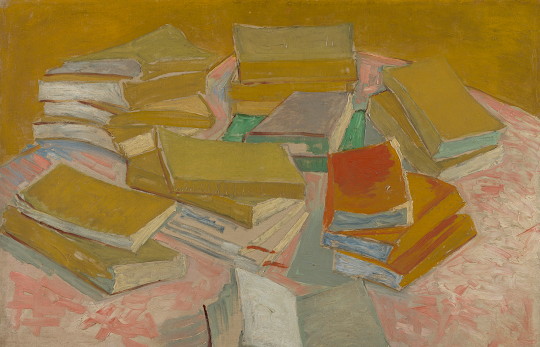 We're reading a book from the 'In Focus' series, followed by a live book discussion with the author of the book. Check out the schedule