Based on new research, the authors revise current thinking on Van Gogh: he did not purchase the prints in Paris for pleasure, the common assumption up until now, but instead acquired the prints with a view to trading them. The authors also reveal how the vivid Japanese woodcuts by artists including Hiroshige, Kuniyoshi and Kunisada became one of the most powerful, creative sources of inspiration behind Van Gogh’s work, and how they played a pivotal role in his artistic direction.

Alongside the book, the Van Gogh Museum is launching an online overview of the complete collection of prints. The missing works from Van Gogh’s collection of Japanese prints are a spectacular addition to this overview. The Van Gogh Museum has tracked down 50 works in private and museum collections, which have never before been on public display, and now unites them online with the museum collection. The prints are available for download for free as high-quality, high-resolution colour images.

At the symposium Van Gogh & Japan, held at the Van Gogh Museum on 6 and 7 June, various experts will discuss subjects including Japonisme, primitivism and Van Gogh’s collection of Japanese prints. The book, website and symposium together compliment the popular exhibition Van Gogh & Japan (on display until 24 June), which uses more than 100 artworks to explore how Japanese art influenced the life and work of Vincent van Gogh.

Written by Chris Uhlenbeck, Louis van Tilborgh and Shigeru Oikawa, Japanese Prints. The Collection of Vincent van Gogh explores Van Gogh’s collection in detail, analyses the composition and quality of the collection and features images of an extensive selection of nearly 150 prints owned by Van Gogh. Van Tilborgh outlines how Van Gogh acquired the Japanese prints and how he used them. He did not purchase the prints in Paris for pleasure, the common assumption up until now, but instead acquired the prints with a view to trading them. At the time, Japanese art was all the rage. And despite the fact that that the prints purchased by Van Gogh from art trader Siegfried Bing were not the crème de la crème, when he failed to sell the prints, Van Gogh became very attached to them and drew inspiration from them for his own art. Alongside inspiring him, the unusual, colourful and cheerful motifs also offered the artist solace.

Chris Uhlenbeck, a specialist in Japanese prints, analyses the history and composition of the collection: the quality of the colour woodcuts, which artists were well-represented in the collection – e.g. Hiroshige, Kuniyoshi and Kunisada, as well as unknown artists – and which artists were missing, and the fascination with certain motifs. Shigeru Oikawa explains the Western interest in crépons, brightly-coloured prints on crinkled paper – a specific type of colour woodcut that Van Gogh was extremely fond of. Oikawa investigates how the crépons were made, and which were found in Van Gogh’s collection.

Japanese Prints. The Collection of Vincent van Gogh is published by the Van Gogh Museum in collaboration with book production company Tijdsbeeld with the support of the Turing Foundation and the Japan Foundation. The book is published in Dutch and English, the English co-edition is published by Thames & Hudson (London/New York). Price: £29.95/ $45.00.

The missing works from Van Gogh’s collection of Japanese prints are a spectacular addition to the website. Van Gogh regularly gave prints to members of his family, or exchanged them with fellow artists with whom he was acquainted. As a result, these works ultimately travelled all around the world. The Van Gogh Museum has tracked down approximately 50 of these works and will unite them with the museum collection on the website soon.

A variety of keywords have been added to the Japanese prints on the website in order to bring more depth to the collection. For example, a simple click of the mouse reveals that Van Gogh acquired numerous prints of women, that he owned a striking number of prints featuring trees and that he was often attracted to the relatively new, brightly-coloured prints from the latter Meiji period. Explanatory texts elucidating the most significant keywords and leading artists help to offer additional context to the collection.

The interrelationships between the prints and the works of Vincent van Gogh are another unique element of the website. This makes it possible for visitors to the website to click from a print directly through to, for example, Van Gogh’s copy of the print, or to the painted portrait in which the work is featured in the background.

As part of the exhibition Van Gogh & Japan, the Van Gogh Museum is organising a symposium on 6 and 7 June. Researchers of 19th-century Western art will exchange ideas with specialists in Japanese art, addressing subjects including Japonisme, primitivism and Van Gogh’s collection of Japanese prints. Check out the complete programme.

Vincent van Gogh’s collection of Japanese prints is the property of the Vincent van Gogh Foundation and is on permanent loan to the Van Gogh Museum collection. Due to their sensitivity to light, the prints rarely go on display, but the museum has included a wide selection in the blockbuster exhibition Van Gogh & Japan. Featuring more than 100 artworks, including loans from collections all around the world, the exhibition illustrates the enormous impact that Japanese art had on the work of Van Gogh. Especially for Van Gogh & Japan, the museum is also open every Saturday night until 21.00. The exhibition will remain on display until 24 June. 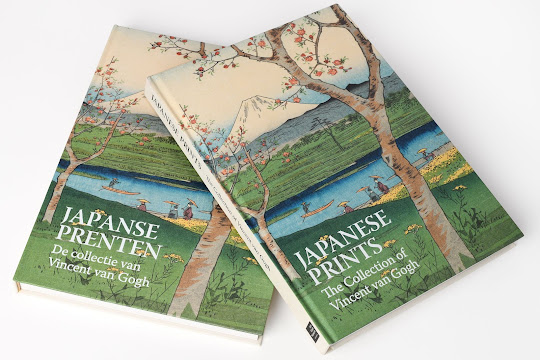 The book is now available in our webstore