Van Gogh specialists from the museum recently studied a small portrait of a figure wearing a straw hat, painted by Vincent van Gogh. Following research published in 2011, the conclusion was drawn that Theo was the subject of the portrait. Based on new insights, this conclusion was recently brought up for discussion.

Self-Portrait or Portrait of Theo?

The two works were traditionally considered to be self-portraits, but following research published in 2011, the conclusion was drawn that one of the two portraits – of the figure wearing the straw hat – was not of Vincent but of his brother Theo. This notion was published in the catalogue of the paintings from the Parisian period, and the title of the work was adjusted from Self-Portrait to Portrait of Theo van Gogh.

Van Gogh specialists from the museum recently returned to study the two portraits afresh. A publication on photographs of Vincent and Theo contained new insights regarding the likenesses and differences between the physical appearance of the two brothers. Some researchers had also harboured prolonged doubts about the identification made in 2011.

The resulting discussion made it clear that, based on all sources and arguments, it was not possible to determine with certainty which of the brothers is depicted on the portrait that was identified as being of Theo van Gogh in 2011. The decision has therefore been taken to use the title Self-Portrait or Portrait of Theo van Gogh for this painting from now on.

Two portraits as a pair

In 2011, it was assumed that the two portraits, which share the same small size and are painted in an identical, strikingly meticulous style, were meant to be a pair. In that case, it would be plausible to assume that two people are depicted: Vincent and Theo.

Theo’s son Vincent Willem van Gogh rejected this suggestion, calling on information from his mother, Jo van Gogh-Bonger. She had said that Vincent had never painted a portrait of his brother.

The conclusion drawn in 2011 that the figure wearing the straw hat was Theo was primarily based on physical characteristics, such as the colour and shape of the beard: ochre coloured instead of orange-red, and trimmed instead of unkempt. The ear was also rounded, while Vincent had ‘fleshy’ ears.

However, the colour of the eyes did not correspond, and the straw hat was probably owned by Vincent. Even though explanations were offered for these considerations, it now proved possible to interpret the physical characteristics differently. During the recent discussions, it was not deemed possible to conclusively identify the man in the portrait as Theo.

There are also arguments in favour of the assumption that the work could be a self-portrait by Vincent. Comparisons with other self-portraits reveal many similarities. Jo van Gogh-Bonger’s comment that Vincent never painted a portrait of Theo also points in this direction. On the other hand, Jo may have been mistaken; the brothers did look very alike. However, it is also possible that Jo heard from Theo himself that Vincent had never painted him.

In light of the fact that we are dealing with painted portraits and not photographs, it remains difficult to effectively weigh up arguments regarding physical similarities; after all, there are any number of reasons why the artist may have deviated from reality.

The old suggestion that the man with the grey hat could in fact be Theo is refuted because the work bears close similarities to a portrait in the Rijksmuseum collection – a work that is conclusively a self-portrait by Vincent. Theo’s brother-in-law Andries Bonger, who was given the painting by Vincent at the time, stated explicitly that it was a self-portrait.

After carefully considering all of the arguments, the resulting conclusion was that there is not conclusive proof for either identification – that of Vincent or Theo. The painting has therefore now been given a double title: Self-Portrait or Portrait of Theo van Gogh. 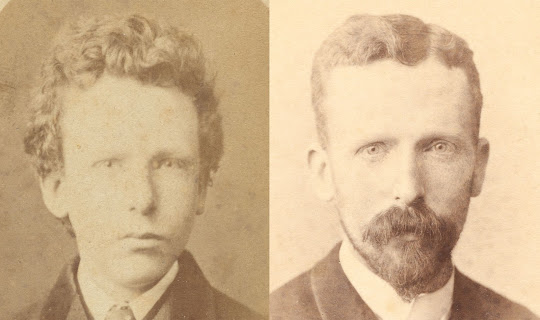 Photograph of Vincent actually of Theo