Until recently, Vincent van Gogh’s ‘Ploughed Fields (‘The Furrows’)’ was a painting with a layer of glossy varnish. However, this varnish was not applied by the artist, who preferred this painting to have a matt finish. A new restoration project is already well underway.

Before a painting is treated, the conservator conducts research into the materials used, how the work was built-up, the restoration history and the nature of the varnish to be removed. Was this layer desired by the artist? Which effects was Van Gogh searching for and how could these be approximated? Thanks to the generous support of Stichting Lieve, the museum’s long-cherished wish of removing the yellowed varnish from Van Gogh’s Ploughed Fields (‘The Furrows’) is now a reality.

While we cannot establish when Ploughed Fields was varnished with certainty, it is clear that the glossy layer was added during an earlier restoration. During this treatment, the painting was lined. The edges of the painting were subsequently taped using strips of paper tape, and the varnish was then applied. The transparent layer was also applied to the tape, so we know that the varnish must have been applied after the lining treatment. Dust and dirt was also found between the layer of paint and the varnish. This dirt has collected on the surface of the painting before the finishing coat was added. The varnish therefore post-dates the painting, and could not have been applied by Van Gogh himself.

Vincent van Gogh was not against the use of varnish, but he increasingly turned his back on it after moving to Paris. Van Gogh was aware of the short and long-term effects of varnish. He was sometimes still tempted to apply varnish, whether locally or not, as this contributed to the saturation and intensification of dark sections.

Another effect of varnish is gloss, but this was not Van Gogh’s aim. In fact, he more often attempted to achieve a matt finish. He geared his materials to what he wanted to achieve: a course canvas, absorbent ground and thinned paint. None of this is evident in Ploughed Fields. This painting is all about clarity, volume and tangibility.

The layer of paint in Ploughed Fields is compact and impasto. Van Gogh was anything but frugal with his application of paint. He loaded his brush with plenty of paint and applied it in rhythmic brushstrokes. The paint was pushed up alongside the brushstrokes, and ridges are formed where the strokes collide. In the clouds, Van Gogh has used his brush to model the paint into an impasto with a tactile quality, which finds a counterpart in the ploughed field. This rough texture spreads the light, but this was changed by the layer of varnish. The varnish reflects light, giving a glossy effect.

Over the years, the varnish discoloured; it yellowed and lost its transparency. At places where the varnish has accumulated, such as in the impasto, the texture has levelled off. In the grooves and furrows, the varnish has even taken on a warm brown hue. This masks the bright colours of the paint Van Gogh himself described the painting as 'a landscape with nothing but clods of earth, the furrows the colour of an old clog under the forget-me-not sky with white flecks' [letter 693]. The forget-me-not blue is now more of a dull turquoise.

Van Gogh did not opt for varnish or gloss, he wanted to maintain the texture and brightness of his work. The aim of the current restoration and removal of the varnish is to bring back the bright, saturated colours of the paint and the pronounced, original texture with a mild oil gloss. This will return the painting to something more like what Van Gogh envisaged.

The restoration of ‘Ploughed Fields (‘The Furrows’)’ was facilitated by a generous financial contribution from Stichting Lieve. 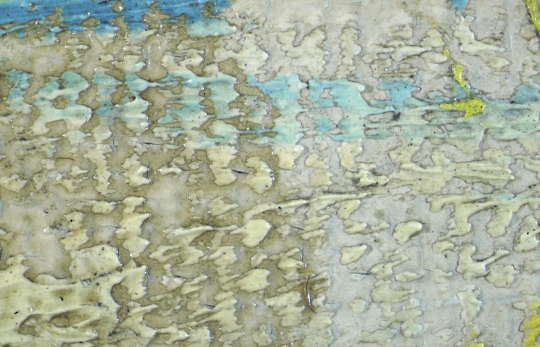 Discover which other works are being treated by our conservators.