American artist Matthew Day Jackson (1974) wants to make us aware of the fact that works of art aren’t eternal. He was inspired by a Van Gogh painting that was lost during the Second World War.

19 June until 14 October 2019
Art, like humans, can be the victim of destruction. As was the case with several iconic paintings, including a version of Van Gogh’s Sunflowers, that were lost during the Second World War.

Matthew Day Jackson feels that these ‘lost’ works of art contain a contradiction that fascinates him: man has the capacity both to create beauty and to destroy. Jackson’s blackened Destroyed by Fire shows what Van Gogh’s painting might have looked like when it was being consumed by flames, just before it was reduced to ashes.

‘I do love how these Sunflowers paintings are still radical images.’ - Matthew Day Jackson, 2019.

Van Gogh inspires, to this very day. His choice of subject, brushstroke and sense of style fire the imaginations of many modern and contemporary artists. An alternating presentation of work by one such artist is always on display at the museum, often together with a work by Van Gogh. 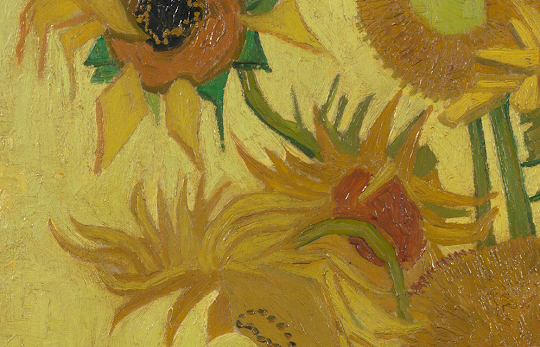