The ‘Sunflowers’ are arguably Vincent van Gogh’s best-known paintings. They have been inspiring people from all corners of the globe for generations. For the first time ever, the sunflower paintings will go on public display together: online in a virtual 360° exhibition.

Van Gogh painted the Sunflowers in Southern France more than 125 years ago. He painted a total of five versions. Following his death in 1890, the paintings were scattered around the world. They were given new homes at five renowned museums in Europe, Asia and the United States.

On 10 August 2017, a long-cherished dream became reality: after more than 125 years apart, the iconic paintings will be displayed together again! View all five Sunflowers in the unique virtual 360° exhibition. The exhibition is accompanied by commentary from Willem van Gogh, great-grandson of Theo van Gogh (Vincent’s brother), who narrates the remarkable story of Vincent and his Sunflowers.

If you would like to discover more about the various versions of the sunflower paintings, make sure not to miss the series of five consecutive Facebook live streams on 14 August 2017. In these special broadcasts, the curators and/or directors of the various museums introduce ‘their’ version of Sunflowers. Each lives tream will last approximately 15 minutes and can either be viewed live or at a later time.

Five international museums teamed up to unite the sunflower paintings: the National Gallery in London, the Van Gogh Museum in Amsterdam, the Philadelphia Museum of Art in the United States, the Neue Pinakothek in Munich and the Seiji Togo Memorial Sompo Japan Nipponkoa Museum of Art in Tokyo. Facebook provided the necessary technical support. 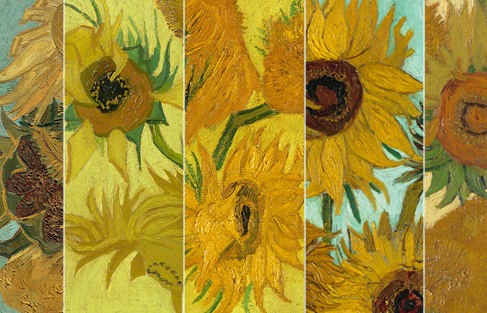