Fourteen years after it was stolen from the Van Gogh Museum, the painting View of the 'Sea at Scheveningen' was recovered in 2016. Since returning to the museum, the work has undergone extensive examination and conservation treatment. Read on for the details.

View of the Sea at Scheveningen and Congregation Leaving the Reformed Church in Nuenen have gone back on display on 17 April 2019. The works were recovered in 2016, 14 years after they were stolen from the museum. The works will be given a special place in the museum during the initial months, displayed alongside information about the research and conservation treatment. In mid-September, the work will move to their ‘old’ place in the presentation of the collection, alongside Van Gogh’s other early paintings.

Restoration treatment of 'View of the Sea at Scheveningen'

Van Gogh painted View of the Sea at Scheveningen in The Hague (1881-1883). It is the only work in the museum’s collection from this period, and is one of only two seascapes that he painted in the Netherlands. It is also a significant example of the artist’s early painting style; his highly individual character is already expressed in this work.

The painting proved to have been severely damaged during the theft. A piece of the original paper support including the paint layers on top was ripped from the bottom left-hand corner. This made the lining canvas underneath visible. This canvas was added during earlier conservation treatment to strengthen the original support and paint layers.

During the restoration treatment, the lacuna was filled using a 3D-printed mould. This mould was created using a scanning technique called optical coherence tomography (OCT), which determined the thickness and surface texture of the paint around the missing area. The technique was also used to ascertain the contours of the lacuna. Using this information and archive photographs from before the theft, scientists from Northwestern University (Chicago) could reconstruct the original relief of the paint in the bottom left-hand corner.

Using the mould resulting from the research, the conservator was able to produce a filling for the missing corner. Once the filling had been attached to the painting, it was retouched by hand after a colour photograph of the painting taken before it was stolen. The aim of this treatment was to create a reconstruction that most closely resembles Van Gogh’s original brushstrokes. The substance used to fix the filling is reversible, which means it can be removed in the future, if required, without damaging the original surrounding material.

In addition to filling the lacuna, all non-original varnish layers and varnish residues were removed from the paint surface. Old overpaint on the painting was retouched. Due to aging, this earlier overpaint had discoloured and become insoluble. As the painting was originally not varnished by Van Gogh, the aim was to leave the work unvarnished after treatment. Once the varnish was removed, the paint layers were found to be in a fairly good condition so that varnishing was indeed not required.

Treating of the church

In addition to View of the Sea at Scheveningen, the work Congregation Leaving the Reformed Church in Nuenen was also recovered and treated by conservators. Read more about the research and the restoration process of this work. 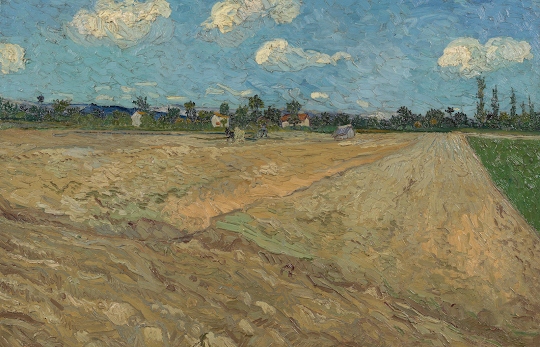 Dive into more stories about conservation and restoration treatment 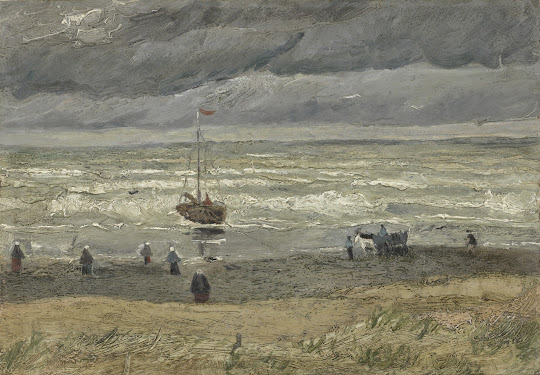 Can you discover traces of sand when you look at the painting up close?